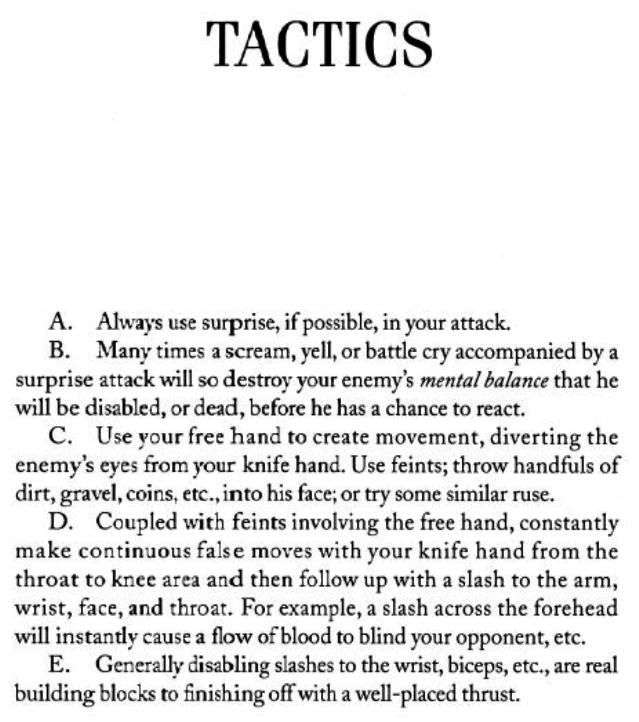 Psychological warfare. It's not all flowers, goats and Metallica. It can be one man, one weapon. One man, no weapon. The purest form of psychological weaponry available to date: the human and his actions.

The Spirit of the Bayonet: Primal Screams


The shear yelling of the words, "FIX BAYONETS!" sends a wave of energy into your soldiers. It sends a message of total warfare and intimidation into that of the enemies. But why is this?

Responses are stimulated through a number of mechanisms. Visual disincentives, auditory discouragement; artificial focus and control promoted by natural chemical excretion and body processes. We're animals after all - but we don't lock horns and fight... We don't growl and show our teeth. We fight in a unique fashion on this planet. We fight from hundreds of meters away, even miles. And we fight toe-to-toe, face-to-face. Each spectrum, each pole has its own intent. The intent in a close combat engagement where you are forced to instill the use of the bayonet is one that is rarely found in combat but never the less the behaviour and theory around the bayonet is awe inspiring.

The bayonet is known as being one of the most fear wrenching weapons employed on the battlefield. An enemy with a bayonet, is an enemy with a mind of steel - who will strike a sharp object through flesh, time and time again. It's violent, it's a risk and the person who wields it is just the same! Some may view it as a rational response, an emotional mechanism, an overwhelming psychological force. In reality, it's a mixture of all three. It is not a negotiation, it is a fight to the death routed by a forceful act aimed at maiming and killing. It's not a routine decision and it can be the opposite of gut instinct.

It has to be a mental-decision process that can only be initiated by you.

The concepts behind the initiation:

You know there is a threat, you have your bayonet. If you had any other option you would of exploited it. Now is not the time to decipher, it's the time to act. The only thing needed is 'toughen the fuck up pills'. Self-induced, route: mentally!

A scream, a primal scream that comes from deep down inside, instilling true hatred and dispelling nervous tension will put focus on the task at hand. The adrenaline dump is already flowing through your blood, control it, let out negative energy.

This is not a made-up Jedi-warrior mantra. This is fact. The same principles apply to simple, civilian tasks as public speaking! Public speakers walk, and move their legs and hands to DISPEL negative, nervous energy.

A scream will instill fear into your enemy, it can cause a relapse of the decision-making process; as quite similar with the purpose of flashbangs and other distraction devices.


No, this is not through 'psychic' energy like the movies might tell you. We're not here to 'bombard them with negative thoughts'. We're here to influence actions in our favour, to destroy the enemy. The primal scream, is one of the ways we do this. Other psychological building blocks also include locking eyes with the enemy, charging them with speed and dominating the environment and situation in one fluid motion to name a few.


The problems with the initiation:

If there is any such lack of confidence, ability or intention to use the tool of warfare then it shall not be used. You must instill a warrior mindset, intent on killing and destroying the enemy in any manner for any physical, metal on flesh weapon to be effective. The weapon is only as effective as its user. Lack of confidence is related to training, and as the Military classes bayonet training as a 'marginal skill', it has a mental effect on the perception of the weapon to the populace. Countering this dogma is a key element to being able to use the bayonet as a unit purposefully.

If a soldier anticipates the worse and is not properly mentally prepared then they may set their own destiny in stone. Metacognition is one of the ways we learn about ourselves, to truly know if you have the guts for combat try driving a bayonet into pig flesh, into a mannequin, into a visual representation of an enemy soldier. This weapon takes prior practice... and not only physically.

Yes, it's a tool that may be old and 'so world war one', but it's not out-lawed. The bayonet is a formidable tool in the right hands, and the right mind. If you use it incorrectly, like all tools, it will fail... because you failed it. When the chips are down, rely on self and ability.
CQB-TEAM Education and Motivation.