"In a given situation that you are just needing to pass the door to get to a certain area this is called a blow by. We just cover the area as we are passing by the door as fast as possible getting out of the doorway." - SEAL instructor from Trident Tactical (TTS). Some people call this a blow-by, a pass and cover, a pass and hold, travelling, a bypass, lateral strafing, etc.

This technique is not a "static" technique like a turn-off where you hold at the danger area. It is a mobile technique, you are moving to cover the danger area and continue covering it until you are clear. Often you will see airsoft teams and similar conduct these drills, replicating or mimicking that of SEAL teams. As opposed to just "bursting" or "blasting", running across the opening with speed on your side, blow-by takes security into account while retaining speed of movement as you cross you are still able to quickly engage and keep moving in the direction of travel. This means your team isn't halted and blockaded from progressing.

This technique can transfer to other aspects of room clearing, too. It can be used on auxiliaries and oddities like small rooms, small obstacles, wardrobes, etc, to quickly bypass. You often see this in a stack where designated covermen cover the danger area as the group moves by, usually but not always first man initially and then second man and rear man, or alternating configurations of that. This allows the team to retain in a tight (non-dispersed) stack as they move down the hallway, immediately ready for entry against a closed door. 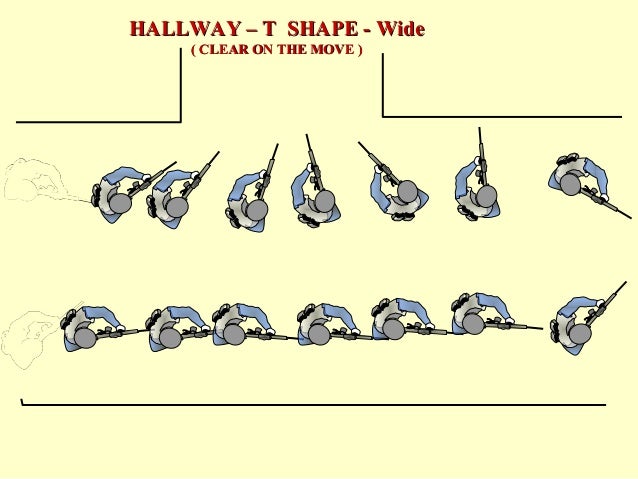