by konte
Hello
Compliments to the admin and all users for the great informations posted in this forum.

How do you operate a flashlight installed on your handgun?
I've just bought an "Insight Tech wx150".
I can operate the light with two indipendent lever on each side. When i fire right hand, it's easy operate the light with my right index finger. I take the finger off the trigger and i can illuminate my target.
But if i've to fire, i can not do it and at the same time use my light. (my index is on the trigger, and i don't want to use the constant on mode).
Maybe i can use my left hand if i shot using two hands.

Anyone use a particoular technique??

Sorry for my poor english

by kustom
I just mount mine on the left side of my M4, and activate it with a push button tailcap by using my left thumb. To do this, I have to take my left hand off my bitch grip and mag-grip the weapon. It's uncomfortable, but it works pretty well, especially after some practice.
by Jack
First things first, I don't usually use my handgun weapon mounted light. I prefer to have a hand held instead. However there are a lot of instances where a weapon mounted light comes in handy.

The temporary on switch when activated by the shooting finger is pretty much useless. However the ability to lock the light on with the shooting finger is a handy and useful feature. Although I GENERALLY don't like to leave the light on constantly. There are times when I might want to quickly transition to my handgun, activate the light and then clear a closet or something like that. Another instance where the constant on one handed activation might come into play is when drawing and holding somebody at gunpoint.

GENERALLY though(if I'm going to use the weapon mounted light at all) I activate the light with my support hand thumb. This allows me to strobe or shut it on instantly. Do keep in mind though that when holding the light on with the support side thumb and firing live rounds, the thumb has a tendency to slip off thereby deactivating the light.

The most use I have gotten out of my handgun weapon mounted light is by taking the batteries out and replacing them in my hand held flash light when it goes dead.

I hope this answered your question.
by konte

Jack wrote: Do keep in mind though that when holding the light on with the support side thumb and firing live rounds, the thumb has a tendency to slip off thereby deactivating the light.

I convinced myself, reading Ken Good, of the importance of an hand held light, (and for this reason i also bought a BH gladius) but i still want to have a weapon mounted light.

Thank you, now it's time to make practice on activating my light with my left thumb!
by jcheng14
If a weapon mounted light is a must then perhaps you could try a pressure switch.

jcheng14 wrote:If a weapon mounted light is a must then perhaps you could try a pressure switch.

Yeah, you can get them put into a handgrip, excellent choice.

Good to have multiple switches though for light on/off when you touch it and constantly on.

by Ryan
A few more videos on this subject:


Talks about different types of holds, flashlights and uses to - for example 'intermittent lighting'.

by Ryan
Wouldn't it be great if they connected it to your thought system? Think light and there will be light! Exactly like those with 'locked-in' syndrome and the advancements in Medical technology that makes communication through 'games' involving arrows and sounds possible.

Anywhoo, about light. Never silhouette your buddies through muzzle sweeping with light - it's common and it's dangerous. It will expose what is dark to what is light, exposing your buddy in the process isn't apart of the goal. This is called being "back-lit".

Check each point of cover before moving.

by jimothy_183
What do people think about using red flashlights to prevent loss of nightvision?

by Ryan
Used in the military for checking maps and what not without losing your full natural night vision. I have not seen it used on a weapon, I don't think we will, I think a brighter light offers you more advantage to get those light rays expanding and getting you the biggest arc of view possible. It's also half an advantage when in the suspects face to disorientate and/or temporarily blind them, otherwise it is basically doing a job as a laser. The cons with this are obvious, they can simply engage the light but in a force-on-force situation in low-light conditions it's a natural occurrence you have to deal with and learn to counter (I.e. the FBI grip).

"Pilots in World War Two were operating 24 hours a day. They were often flight planning and briefing right up until takeoff. By wearing red-tinted glasses or goggles for 20 to 30 minutes before flight, they could night adapt and plan. Red-tinted lenses block the visible spectrum except for red, and since red doesn’t destroy rhodopsin, your eyes night adapt. The Army used red filtered flashlights to read maps and documents while maintaining night vision. The military has changed to a blue green which is almost as effective but reveals colors."

In US SF Selection you have to be 50 meters away from the road and HALTED to use a red-light.


It can also be used as an aiming device or reticule for instinctive shooting techniques used by the British Special Air Service.

And you are moving from room to room, environment to environment. You may hit a full-light room and lose your night vision straight away and then your best chance is a bright light. If you really meant for Night Vision Goggles (NVG) then maybe a 'dim' version would be better:- quite like subdued or dim tracers, as NVG's work off the ambient light available in the environment and can become quite difficult for identification I believe this would help. All just theory though...

Surefire hand grip light with low power LED thumb light switch (great for ship boardings. The LED helps you see without giving off a light AD, giving away your position) ...

What do you think of strobe flashlights? Or avoiding stroboscopic effects?

by Ryan
Speaking of changing light levels, is there any tips from coming from a very bright environment into a very dark one?

Ryan wrote:Speaking of changing light levels, is there any tips from coming from a very bright environment into a very dark one?

Take the polarized goggles off.

by Ryan
Haha nah it's the same when driving, you come out of a tunnel. Light transition. It's annoying for the first few seconds, seconds count. It can adversely affect your eyesight, the old 12o'clock sun in the sky sniper trick! Glare.

"Flashlight Deployment - Our method of incorporating a hand held flashlight during low light engagements is an adaptation of another well known technique. However, with the RB1 method, the shooter is able to illuminate the sight picture and the threat at the same time. This aides the shooter to easily check the sight package prior to engaging. The flashlight is held in the support hand, hammer fist style, indexing the fist against the cheek bone. This aligns the light source with the shooters eyes, sights and target, giving him an excellent view of the situation. This technique does rely on being competent at shooting with the strong hand only." - RB1. 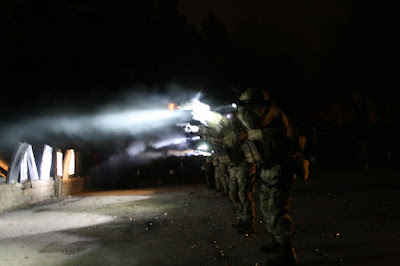 If you are doing things the ranger way- white light clearance. A pressure switch is terrible, you will get tired of holding your thumb or finger on the button. It will slide off whe you need it etc.

I also don't like the on/ off method unless you are being back lit, I don't know about you but in cqc I always like to see what I'm looking at, and a gunfight at 5' with a flashlight is still better than a 1' fight with no light at all.

Majority of us are fighting criminals or terrorist and if you train right you are a better shot. Rely on solid tactics and not light shows.

by jcheng14
NOD's over white light if at all possible. Not everybody can get into it. 2K is a bit of an expense. I've started using a 952V. It has both an IR and a white light head. I have it on a thorntail mount at 1-2 going to a dual switch on the top rail. I shoot thumb over / C-clamp, so I can easily hold that on while shooting naturally. If I swap shoulders, I can hit the button on the light itself and still hit the other switch on the pad for the DBAL. I suggest carrying a handheld separately if at all possible as well too though. There have been occasions where I set the handheld down on and moved to a different location.

As for using the light, don't back light anybody. If you aren't one of the first two people in front, your light should not be on unless off the to side of the element. Also don't leave a light always on. It's a giant beam that points back to you as well. The issue is that you can only see what your light is pointing at. Everybody out there can see where the light is pointing FROM. The only exception to this is if you are part of an overwhelming force doing a search. Even so, if that underdog party decides to fight, the guy with the light always on giving his position away is dead first. Lights shouldn't be for search, but for ID. If OPFOR has good fieldcraft then you will never find them with a light always on. You hit them with white light just before you engage to make sure you are shooting at the right people. This is from Labeouf / NOLANTIC.

Re: Brightness levels. Going from outside to inside where it's darker necessitates a WML. For awhile I didn't have any white light capable lights. NODs / IR lights should work for everything right?! And they do, at night. But the transitional brightness area's require white lights. You have to go in and make that first entry into the building with white light on.

Good for reading maps, compass or watch. They aren't available with enough power for a tactical light(250+ focusable lumen)

On my G17 I have the tactical switch on the left side of the grip(I'm right handed), so if i grip the gun a little firmer its on. using some extra gripping power to push the switch with my middle-/ring finger does affect my aim. At the range at 25 yards not only does my grouping increases to about 10 inches, it also shifts at least 4-5 inches (center of the grouping).

Our front men have shields with powerful LED's, and everyone has a helmet-mounted light and one on the long gun. So I hardly ever use it. In fact I only use my sidearm when I need to cover an angle over 90 degrees. on my MP5 A2 and 416 I use vertical front grips, and I do exactly the same thing there, except the switch is on the right side, say 4' o clock.

As said before lights should be used only when you need to, because they can give away your position, the position of a teammate, your intentions and your focus.
All times are UTC
Page 1 of 1