VITAL TARGETS The body is divided into three sections: high, middle, and low. The effects of striking these targets follow (Source FM 21-150):

High Section. The high section includes the head and neck; it is the most dangerous target area.

1. Top of the head. The skull is weak where the frontal cranial bones join. A forceful strike causes trauma to the cranial cavity, resulting in unconsciousness and hemorrhage. A severe strike can result in death.
2. Forehead. A forceful blow can cause whiplash; a severe blow can cause cerebral hemorrhage and death.
3. Temple. The bones of the skull are weak at the temple, and an artery and large nerve lie close to the skin. A powerful strike can cause unconsciousness and brain concussion. If the artery is severed, the resulting massive hemorrhage compresses the brain, causing coma and or death.
4. Eyes. A slight jab in the eyes causes uncontrollable watering and blurred vision. A forceful jab or poke can cause temporary blindness, or the eyes can be gouged out. Death can result if the fingers penetrate through the thin bone behind the eyes and into the brain.
5. Ears. A strike to the ear with cupped hands can rupture the eardrum and may cause a brain concussion.
6. Nose. Any blow can easily break the thin bones of the nose, causing extreme pain and eye watering.
7. Under the nose. A blow to the nerve center, which is close to the surface under the nose, can cause great pain and watery eyes.
8. Jaw. A blow to the jaw can break or dislocate it. If the facial nerve is pinched against the lower jaw, one side of the face will be paralyzed.
9. Chin. A blow to the chin can cause paralysis, mild concussion, and unconsciousness. The jawbone acts as a lever that can transmit the force of a blow to the back of the brain where the cardiac and respiratory mechanisms are controlled.
10. Back of ears and base of skull. A moderate blow to the back of the ears or the base of the skull can cause unconsciousness by the jarring effect on the back of the brain. However, a powerful blow can cause a concussion or brain hemorrhage and death.
11. Throat. A powerful blow to the front of the throat can cause death by crushing the windpipe. A forceful blow causes extreme pain and gagging or vomiting.
12. Side of neck. A sharp blow to the side of the neck causes unconsciousness by shock to the carotid artery, jugular vein, and vagus nerve. For maximum effect, the blow should be focused below and slightly in front of the ear. A less powerful blow causes involuntary muscle spasms and intense pain. The side of the neck is one of the best targets to use to drop an opponent immediately or to disable him temporarily to finish him later.
13. Back of neck. A powerful blow to the back of one’s neck can cause whiplash, concussion, or even a broken neck and death.


Middle Section. The middle section extends from the shoulders to the area just above the hips. Most blows to vital points in this region are not fatal but can have serious, long-term complications that range from trauma to internal organs to spinal cord injuries.

1. Front of shoulder muscle. A large bundle of nerves passes in front of the shoulder joint. A forceful blow causes extreme pain and can make the whole arm ineffective if the nerves are struck just right.
2. Collarbone. A blow to the collarbone can fracture it, causing intense pain and rendering the arm on the side of the fracture ineffective. The fracture can also sever the brachial nerve or subclavian artery.
3. Armpit. A large nerve lies close to the skin in each armpit. A blow to this nerve causes severe pain and partial paralysis. A knife inserted into the armpit is fatal as it severs a major artery leading from the heart.
4. Spine. A blow to the spinal column can sever the spinal cord, resulting in paralysis or in death.
5. Nipples. A large network of nerves passes near the skin at the nipples. A blow here can cause extreme pain and hemorrhage to the many blood vessels beneath.
6. Heart. A jolting blow to the heart can stun the opponent and allow time for follow-up or finishing techniques.
7. Solar plexus. The solar plexus is a center for nerves that control the cardiorespiratory system. A blow to this location is painful and can take the breath from the opponent. A powerful blow causes unconsciousness by shock to the nerve center. A penetrating blow can also damage internal organs.
8. Diaphragm. A blow to the lower front of the ribs can cause the diaphragm and the other muscles that control breathing to relax. This causes loss of breath and can result in unconsciousness due to respiratory failure.
9. Floating ribs. A blow to the floating ribs can easily fracture them because they are not attached to the rib cage. Fractured ribs on the right side can cause internal injury to the liver; fractured ribs on either side can possibly puncture or collapse a lung.
10. Kidneys. A powerful blow to the kidneys can induce shock and can possibly cause internal injury to these organs. A stab to the kidneys induces instant shock and can cause death from severe internal bleeding.
11. Abdomen below navel. A powerful blow to the area below the navel and above the groin can cause shock, unconsciousness, and internal bleeding. (12) Biceps. A strike to the biceps is most painful and renders the arm ineffective. The biceps is an especially good target when an opponent holds a weapon.
12. Forearm muscle. The radial nerve, which controls much of the movement in the hand, passes over the forearm bone just below the elbow. A strike to the radial nerve renders the hand and arm ineffective. An opponent can be disarmed by a strike to the forearm; if the strike is powerful enough, he can be knocked unconscious.
13. Back of hand. The backs of the hands are sensitive. Since the nerves pass over the bones in the hand, a strike to this area is intensely painful. The small bones on the back of the hand are easily broken and such a strike can also render the hand ineffective.


Low Section. The low section of the body includes everything from the groin area to the feet. Strikes to these areas are seldom fatal, but they can be incapacitating.

1. Groin. A moderate blow to the groin can incapacitate an opponent and cause intense pain. A powerful blow can result in unconsciousness and shock.
2. Outside of thigh. A large nerve passes near the surface on the outside of the thigh about four finger-widths above the knee. A powerful strike to this region can render the entire leg ineffective, causing an opponent to drop. This target is especially suitable for knee strikes and shin kicks.
3. Inside of thigh. A large nerve passes over the bone about in the middle of the inner thigh. A blow to this area also incapacitates the leg and can cause the opponent to drop. Knee strikes and heel kicks are the weapons of choice for this target.
4. Hamstring. A severe strike to the hamstring can cause muscle spasms and inhibit mobility. If the hamstring is cut, the leg is useless.
5. Knee. Because the knee is a major supporting structure of the body, damage to this joint is especially detrimental to an opponent. The knee is easily dislocated when struck at an opposing angle to the joint’s normal range of motion, especially when it is bearing the opponent’s weight. The knee can be dislocated or hyperextended by kicks and strikes with the entire body.
6. Calf. A powerful blow to the top of the calf causes painful muscle spasms and also inhibits mobility.
7. Shin. A moderate blow to the shin produces great pain, especially a blow with a hard object. A powerful blow can possibly fracture the bone that supports most of the body weight.
8. Achilles tendon. A powerful strike to the Achilles tendon on the back of the heel can cause ankle sprain and dislocation of the foot. If the tendon is torn, the opponent is incapacitated. The Achilles tendon is a good target to cut with a knife.
9. Ankle. A blow to the ankle causes pain; if a forceful blow is delivered, the ankle can be sprained or broken.
10. Instep. The small bones on the top of the foot are easily broken. A strike here will hinder the opponent’s mobility. 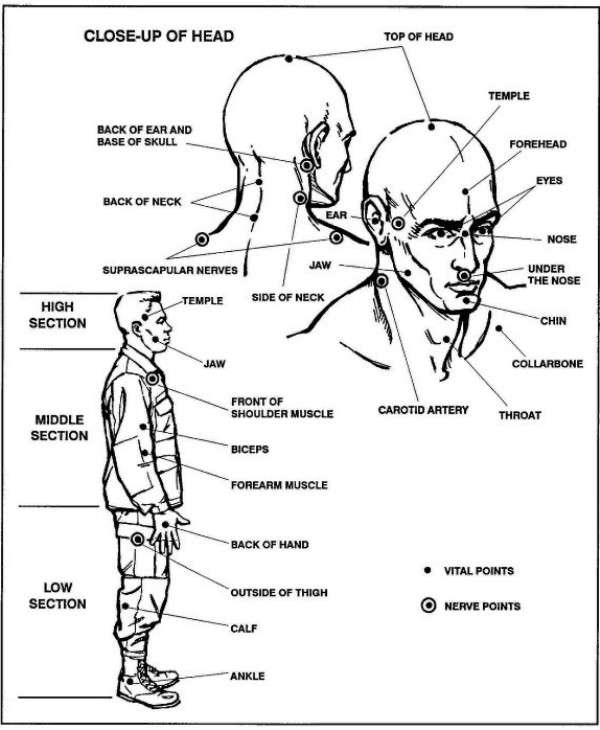 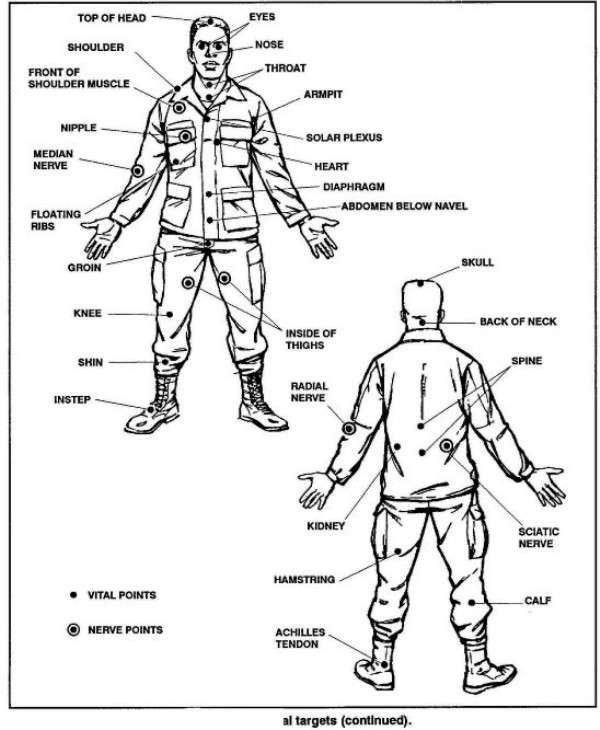 This was taken from correspondence between Ronin and myself. It seemed pertinent to the topic here so I posted it (not to mention great advise)...I sent him the information on a Peroneal nerve strike, quoted below, from a now forgotten site, and questioned it....

KG59: "Ronin, have you heard of this or used it?
Quote:
"Peroneal strike is a temporarily disabling blow to the side of the leg, just above the knee. The attacker aims at the common peroneal nerve, roughly a hand span above the knee, towards the back of the leg. This causes a temporary loss of motor control of the leg, accompanied by numbness and a painful tingling sensation from the point of impact all the way down the leg, usually lasting anywhere from thirty seconds to five minutes in duration. The strike is commonly made with the knee, a baton, or shin kick, but can be done by anything forcefully impacting the nerve. The technique is a part of the pressure point control tactics used in martial arts and by law enforcement agents. This strike is similar to and utilizes the same nerve as the childhood prank of "Dead-legging" someone. Repeated strong Peroneal strikes can cause nerve damage and have a high chance of damaging the surrounding tissues due to the spontaneous nature of the technique and the nerve location."

Ronin: "Yes, I've used it. The sciatica nerve bundle that runs down the outside of the leg is an easier target unless you can get alongside your opponent to access the peroneal point. Unless you're well trained at attacking nerve "points" you may waste a valuable strike on a near miss. There are a lot of other factors in hitting "points" and, to me, it's almost like striking someone in the head. It may drop them and it may not.

Better to play safe and use other targets/techniques that have an undeniable effect. What I like is when a target has a solid result with a pressure point as an added bonus. A strike behind the ear is an example. So is a blow to the floating ribs. Point strikes are devastating when the opponent is susceptible and you've hit the angle, direction, and location correctly. Not something for the novice to strive for in basic training."

KG59: "I remember many old-time cops used to whack you behind or to the side of the leg to get you moving or to get their point across. I did see a Policeman hold a guy by the shirt collar to lead him towards the Paddy Wagon. The guy tried to struggle and the cop let him have it behind the thigh...OUCH! When the dork got up he seemed to have calmed a little." - http://iccf.freeforums.org/vital-targets-t246.html ...

The nine angles of attack