Sometimes, in close combat, the need emerges to kill or injure you opponent with the light infantry shovel at a range of 5-7 meters. For this you must enter a left-sided combat stance, holding the shovel by the far third of the handle, with the blade pointing upwards and forward, and raise it behind your head, while turning your torso to the right. Then straighten the arm while turning your torso to the left, aim your shovel to the target and let go of it just as your arm straightens, and your shovel is aimed at the target, breathing out sharply. In this form of shovel-throwing, the most common mistake is to tilt the hand too far down, which causes the shovel to spin too much, reducing the likelihood of it striking blade first. Another mistake is moving the hand sideways, rather than upwards, when raising it for the blow. That would cause a miss. 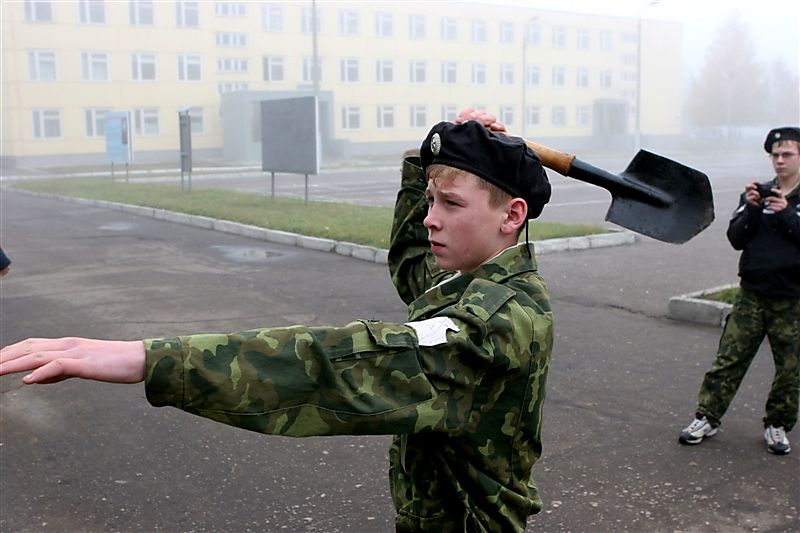 Another way to throw your entrenching tool is throwing it from concealment. It is used when one must strike the opponent by surprise. For this your left side should be turned towards the target. The right hand should hold the tip of the handle, with the shovel lowered along the body, blade down. For the throw one must tilt the torso suddenly to the left, and simultaneously, using a straight arm, throw the shovel over your head to the target. Its axis must be the same as that of your arm. The shovel is released at the moment of maximum tilt, with the shovel pointed to the target.

At distances of 10-12 meter you must throw the shovel so it spins twice.


The full-sized shovel can also be used to engage the opponent. The BSL-110 can be used as a spear at range of 3-7 meters. For this purpose, assume the left-sided combat stand, folding the left arm before the chest. With the right hand, take the shovel near its blade and raise it to the right shoulder, blade forward. With the blade forward, take the shovel hand to the right, and then, pushing forward sharply with the right leg and turning forcefully with your torso to the forward-right, straighten your arm and throw the shovel like a spear. After the throw, body momentum causes the right leg to step forward.

Sometimes a shovel of any size can be used to stop a fleeing opponent by disabling his legs. In this case one uses the shovel as if one was playing gorodki – assume a left-sided combat stance, holding the shovel by the tip of the handle. Take the arm to the side and backwards while turning the torso to the right. Then, pushing with the right leg, throw towards the target from the side. Choose the amount of spins individually – remember the light shovel spins more!

Throwing the light infantry shovel from behind cover, from the prone position, and from a roll

These throws are identical to knife throwing in training techniques. While shovels are more rarely used in combat as compared to knives. Still you should train in all types of shovel throws – they may save your life one “wonderful” day.

The same applies to different forms of ax throwing, especially to throwing an ax during jumps followed by rolls. Furthermore, each man has his own preferred weapons and throwing methods – but this does not exclude learning the rest of the broad arsenal of available combat techniques.

Re: Throwing technique for the light infantry shovel

Very interesting and thanks for posting...

Perhaps this would interest you USSR Militia - Infantry Shovel Fighting.pdf