by jimothy_183
Can anyone here suggest some books on CQB?

I've seen books on amazon and I've seen some of the same books pop up on the net which probably means that those books are quite popular.
by birddog
Are the books fiction or non-fiction ?
by jimothy_183
Non-fiction I think.

Heres and example of a book I've seen in various places: 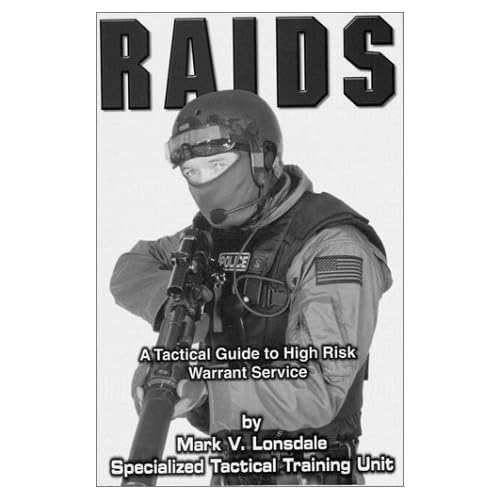 Source: http://www.amazon.com/Raids-Tactical-Gu ... 521&sr=8-4
by birddog
I remember something Jake had said in another thread. "Most SWAT officers will never discuse any tactice used and just a few will give basic details" I have a hard time believing anyone who writes a book about CQB.....if I was a bad guy, I could learn how SWAT would breach my drug house and prepare for it................
by jimothy_183
Yeah I guess thats a good point there.
by Admin
I I have read all the stuff on this page:
http://www.cqb-team.com/Poducts.html

I will make a list later to day of good cqb tactic books and dvd.
by jimothy_183
Oh yeah, I totally forgot about that page on the website, should have thought about that page first.
by Admin
Books:
CQB a guide to unarmed combat
RAIDS a tactical guide to high risk warent service.
Special Forces, close quarter combat manual.
The art of high risk entry
Advanced weapons training for hostage rescue

All above have very good info on CQB tactices some more some less.
i you use a firefox browser you can clik on the text link on my site, it dosen’t work in explorer.
by Jack
I highly recommend the "Tactical Advantage". If you are interested in improving your CQB skills this is the place to start. This book lived up to my expectations and then some. It was like a Bible to me for some time. I have also read several other books that he has put out. I recommend them all.

I have also read some of the other books posted on that page. I am a reader and the list of books I have read is extensive. Suarez writes good books. Start with those. His books mostly build individual techniques, which is great.
by jimothy_183
Cool, so does this book the "Tactical Advantage" have techniques and what not with diagrams like in the Tactical Trainer of the CQB-Team website? Like I mean can you tell us generally the kind of stuff I would find in the book?
by Jack
The book is totally about searching buildings, in a stealth or systematic mode. It primarily focuses on how to clear a building as an individual. Which is something that most people don't teach. It dose touch on two man team tactics and even three man team tactics.

This book is for anyone who owns a firearm and wants to learn how to clear a house by themselves. Or anyone who plays video games and want to learn how to work the corners and leave the brass in the hallways. This would be an outstanding book for a point man on a team. Basically anyone who goes into harms way in an Urban environment should read this book.

The book shows you how to clear corners, doorways, closed doorways, T intersections, stairs and other hazards, all as an individual. It also shows you how it becomes easier when you have more team mates to help you.
by jimothy_183
I guess it could prove very useful to me as something basic and something to start on but I was looking more for books more on teams of 4 or more people because I like to play with my team mates.

And what does it mean to "leave the brass in the hallways"?

by Jack
If all of your team mates understood and used the tactics, you would shoot more bad guys and be a better team for it. Just because you are building individual tactics doesn't mean that you don't use these tactics in a team setting. Remember what I said about understanding the goal, over just understanding what your role is. This book helps you understand the over all goals and objectives while conducting a systematic search and would definitely help any team that is involved in this type of operation. Even dynamic searches are forced to slow down some times. Objectives change and you have to switch gears quickly in CQB.
by jimothy_183
Ok then, point taken.

I'll get that book sometime in the future.
by Jack
I don't intend to sound preachy. It's just that so many people want to get the cart before the horse. Being professional starts with individual tactics, then moves to two man team tactics and eventually Team tactics. Sure you can throw a team together and in a few hours or days have them moving through houses and looking cool, but there is so much more to it than that.

Some tactics are easy to acquire. They don't take a lot of time to develop. Other things are harder to achieve. Developing yourself so that you are a warrior, with the MENTAL, TECHNICAL and PHYSICAL skills necessary to do the job takes a lot of time. It is a very long process and it takes a lot of work. It is a personal process that isn't really noticeable in a youtube video, but it is a very real factor in an actual situation.
by jimothy_183
Sounds like great advice. Thanks.

By the way I looked up the book on amazon here and in the sample of the table of contents there seems to be a very wide spectrum of topics covered.

Something tells me I'm in for a loooong read.
by srtunit576

Thanks for all the info and the books that were recommended!
by jimothy_183
Just found a sample of The Tactical Advantage: The Video on YouTube.

Just thought I would put it up here for everyone to see though I don't think I would actually get it myself at least till I've read the book.
by Jack
Good video and good stuff from Gabe as usual. That would definitely apply for room entries.
by jimothy_183
I would imagine it would be best to read the book first right? I mean wouldn't the content of the video build up on stuff from the book or is it just the same stuff but in video form?
All times are UTC
Page 1 of 2