I can also see not sticking to set drills and adapting to the situation. From what Ryan has said the Marines in the said battle were clearly capable of thinking outside the box.
semper acer , semper velox , semper trux , semper promptus
Top

"It was from the Marines ...it was an Army lesson learned.. We stopped stacking when I was in 1/25 SBCT in 2004; mind you that only applies when your outside the building. More causalities are taken when your moving outside rather than inside a building. It's imperative to quickly breach and secure a foot hold... and better if you can move between building through other buildings. OUTSIDE = MORE DANGER"

I'm just wondering how you'd react to that from the individual level. My instructor told me to this, it's going to keep me safe, it's going to get all of us as a numbered force into the room quicker - which keeps us alive. And suddenly you're losing whole fireteams. Suddenly that of which you trust is telling you not to do what they taught. That must either really fortify some amount of introverted self-centeredness or team-centered approaches to do an action to keep yourself and/or the team alive OR it must leave the space for you to really lose trust in what is taught and the authority of such related structures such as combat experience, combat research - maybe even both. But I am glad they can snap out of it just as quick as they feed it people. "Tactical munchies, nah doesn't sit well on the stomach - let's try tactical sandwiches". Let that be broken which saves your life or minimizes the potential for it. Everyone has seen Fallujah combat footage out there, they know how irrational it was - tactics try to make it rational but when reality bites... sometimes it just clues you on to make it work for you...

I wonder how they segregate such scenarios. I mean if stacking was taught since the early 60's for example and it has all those backings and then is ditched, it must be an eye-opener. It proves that taught tactics are not always operational. Therefore for me personally all those combat effective, been there done that arguments aren't the right way to settle a debate! I mean if I said "don't stack" fifteen years ago, I would of got kicked in the balls and shouted at really badly. Then again it was pretty much an optional technique from its pure foundation - the same with entries because you don't have to enter the room. I do hope they segregate such scenarios for study, to how and why such is removed and modified - in what combat situation, in what theater and to what degree. That'll help future generations, especially the war planners and doctrine men.

Anyhow compare the conventional linear, single stack with splitting the door - to split the door increases chance because you have eyes in multiple angles.

Compare it to the stack above. One point opens the door, the other is ready weapons up. They're not clogging the fatal funnel just to cover the room but at the same time they have enough front security for most threats.

Another adoption was tight versus non-tight (dispersed) stacks which allowed for operators to be prepared due to threat. Dispersed allowed them to cover other areas they may not have been able to (for example an alleyway 5meters behind the last operator) and in anticipation of a threat front who COULD wipe out the whole team in the stack. In a tight stack, you can literally have arms and weapons crossed over each other with legs between legs, as below, and you can see its dangers. 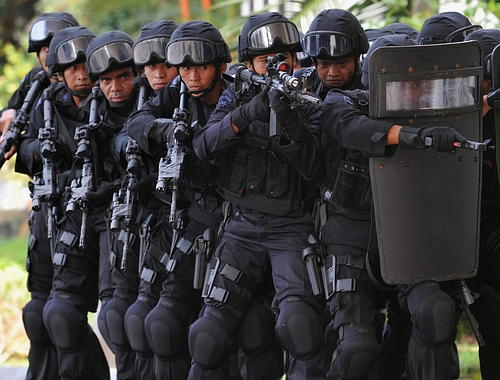 ... In simple terms the current techniques are broadly "SWAT" style techniques wich concentrate on breaching through doors and flooding a building to overwhelm the occupants, capture and search. This is what is behind the "stacking" technique where a team will set up outside the door of a property, breach the door and rapidly pile into the building. This is dangerous in an OBUA enviroment because stacking outside a door puts you all together, not dispersed, and vulnerable to fire, wich is good for a stealth raid but not if you are in a fight. The door is not an ideal entry point into a defended building, it is a "fatal funnel". Also you are putting four men through a door into the unknown and if it blows, then you lose four ...

What is a progressive stack?
CQB-TEAM Education and Motivation.

"Pragmatism over theory."
"Anyone with a weapon is just as deadly as the next person."
"Unopposed CQB is always a success, if you wanted you could moonwalk into the room holding a Pepsi."
Top
Post Reply
24 posts