Forum to discuss all related topics on elite police units.

CBŚ is one of the elite Police Special Unit in Poland. It's special independent delegated unit from Polish Police Main Command.
For Polish standards it's probably best equipped and trained unit. One of the base used weapons is HK416 and SCAR. In simplification it's police GROM equivalent.

To join CBŚ You have to be distinctive Police Officer, with at least 2 years in service. Details of training are strictly resticted.

I can say, that for sure having such a unit like CBŚ makes proud of foreign police forces.

one of joint CBŚ operations with BOA unit (Bureau od Conterterrorist Operations) which can be known for someone from Chris Ryans "Elite Police":
http://www.youtube.com/watch?v=LQEg-1vp ... re=related
Both units had to deal with arrest of dangerous mafia members. You can see that criminals were special prepared for them (enforced doors).

I would like also to describe in few words specificity of Police actions in Poland. Many may not known that there were no terrorist acts in Poland and for today such a possibility is very low (but it's still very closly monited by ABW - Interlan Safety Agency). Poland as western board of European Union is place of transit of drugs, illegal bord crosing and human sale (for prostitution). This are external main activities. Internal problems are: criminal terror (gangs and mafia with postcommunist countries links), corruption (on mass scale), mass drugs sale, prostitution and others. In modern Poland history there are single cases of shootout with fatalities. For exemple most tragic part of Special Police Units in Poland was operation in Magdalenka (city near Warsaw). 2 officer Counterterrorist operators died of injuries caused by home made explosive. Suspects killed few monts earlier police undercover officer and were highly desperate. None of suspects left that house alive.
Top

could you say us, what is official name for this unit.

What I know this team is Part of CBS not CBS. CBS are investigators and operatives, etc, etc...

badger wrote:could you say us, what is official name for this unit.

What I know this team is Part of CBS not CBS. CBS are investigators and operatives, etc, etc...

edit: I found Wydzial Specjalny CBS KGP. what does it mean KGP ? 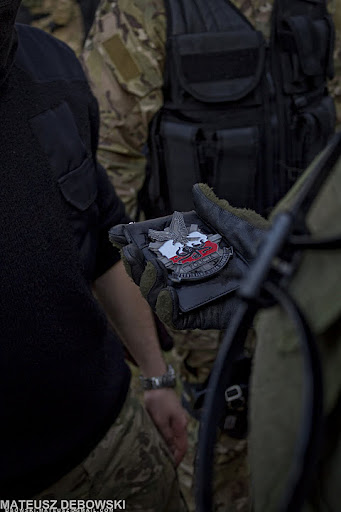 CBŚ badge is eagle striking octopus - which is symbol of corruption in our country;)
Top

I know what means wydzial specialny, Im not far away from your border

but what does it mean KGP.
thanks.
www.specialunits.sk
Top

6th march 2013 is 10th anniversary of one of the most tragic events in Polish Police counterterrorism. During operation in Magdalenka (near Warsaw) two SWAT officers lost their lives and 17 was wounded during high risk arrest of two top dangerous criminals in Poland. This case might be not well known this is why we want to recall this dramatic events and bring memories of two great officers died during duty.

Assistant Chief Inspector Dariusz Marciniak and Commissioner Marian Szczucki died and another 17 officers were wounded. As a result of the fire, the building partially collapsed, burned down, and the two criminals were killed as a result of carbon monoxide poisoning. The criminals were killed in a fire, no one was shot - autopsy showed no gunshot wounds on the bodies of the two criminals. Several police officers after this operation never return to active service. There have been speculations about Pikus belonging to one of the KGB special forces group, but there were no proven conections of his military service in Specnaz.

The Operation involved in Magdalenka officers of the Department of Criminal Terror, and Central Bureau of Investigation Combat Support Unit - total 23 officers. Intel of building was badly made, which caused to assault building by main entrence. SWAT did not have information from other officers that the bandits had murders in their criminal records, they also have explosives and as previously stated "will fight to the death." This lack of intel made decision to stop the murderers as ordinary professional manufacturers of tobacco leaves.

The team did not have any support machine gun, which is useful for pinning during strong defense, there was no sniper rifle or CS grenade launchers. After these events all SWAT forces in Poland were supplied with H & K MZP-1/HK69. Probably at the time of entry to the property, SWAT entry have been already noticed, because on the top floor light was switched on, and soon after it was switched off.

It is sure, that proper observation of area could help to spot explosives. Both criminals had support someone from the Police - about a month Cieślak escaped in the woods from taxi, which was observed. It is interesting that Central Burea of Investigation in Wroclaw have a lot of information on Pikus, such that he killed seven people and blew up a house in Belarus and killed Militia Officer and his wife.

During one of the meetings near Warsaw to which he moved, he met Robert Cieslak and Wojciech Jerzy Brodowski Szurygę aka "Mutant" also known as "Yuri from Piastow". In that time, all three of them occupied the first three places among the most wanted criminals in Poland. Other places on the list were occupied by professional killers from Piastow, a small town between Pruszkow and Warsaw famous for the most dangerous gang in post-war Poland.